skip to main | skip to sidebar

Roving Cameraman
Cameraman based in Edinburgh, employed by ITN, working for ITV's Good Morning Britain covering stories all over the UK and the world. War Zones, World Cups, Royal Tours and many other less exciting assignments, like interviewing current and ex Prime Ministers have kept me busy over the years working in Breakfast Television since GMTV came on the scene back in '93 and regional TV before that. In 2009 I began to record what it is like to work, the often strange and long hours needed to bring the hard news, human interest and fluffy fun to the UK's TV screens in the morning, mostly broadcasting live.

With the travel arrangements back to plan A Colin the sound recordist and I travelled down to Gateshead.

We would be doing a behind the scenes report about an ITV drama that is due for transmission some time in November.

The one off drama “Joe Maddison’s War” is a story about a couple of Geordie mates from the trenches of the WW I coping with life during WW II.

Joe is played by Kevin Whatley and his mate Harry by Robson Green.

The sat nav got us to the location at Saltwell Park but there were no obvious signs of a film drama crew.

Then we spotted one, an orange fluorescent arrow attached to a lamp post by cable ties with one word on it that no matter how often I see it I am reminded of the Dr Who of the seventies.

The word is UNIT. It is the standard sign indicating where a large film crew is.

We found the film trucks tucked behind some high bushes and trees. I parked up.

Richard the 1st AD (first assistant director) with wild long curly black hair skilfully juggling his walkie talkie in his right hand warmly welcomed us on to the bowling green where a scene featuring Robson Green and Kevin Whatley with the female lead Melanie Hill was in the process of being shot. 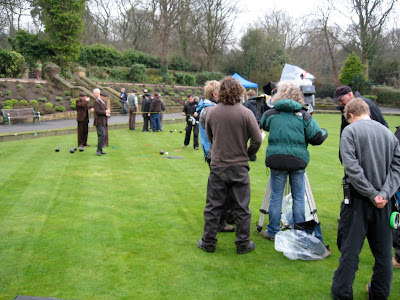 “Just do what you want and get what you need”, he said.

I was a little surprised at his relaxed manner with us and the nods smiles and hullos from the other guys on the crew as they bustled about doing their job.

I think perhaps he noticed evidence of this surprise in my face.

“Don’t worry if you get in the way we won’t be slow in telling you”, he said with a smile.

He then went off shouting commands at the cast and crew in preparation for a shot to be done.

Colin and I were to get the bulk of the shots of the activity on the set before Richard Arnold and producer Liz arrived from London.

They were hot footing it from the GMTV studios where Richard had been doing his “Talking Telly“ segment on the sofa.

The whole atmosphere under the threatening grey skies was very relaxed yet efficiently professional.

Each member of the crew was doing their job seemingly without effort and with a smile.

I got some shots of the camera crew setting up the Red HD camera on the dolly, the sound crew shifting the trolley with the mixing desk on it and waving around the long gun mics shrouded in their fluffy covers on long extendable poles.

The make up lady was doing last minute touching up of Robson Green’s face and the wardrobe guy checked over some of the extras costumes. 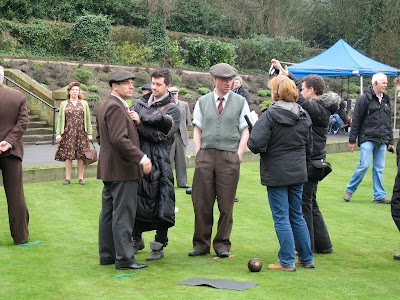 When it was obvious that everything was ready Richard shouted, “Quiet Please! Tun Over! Shooting!”

A quick barrage of “Speed! Mark it!”

The camera assistant doing the “Shot 71 Take One” and the snap of the clapper board came in reply.

I then focused on the actors doing their bit.

Robson bowled a ball and delivered a line.

One of the extras did his bit and Kevin spoke a few words.

There was another scamper around by various members of the crew before the scene was shot again.

This happened a couple of times more giving me plenty of opportunity to get shots of the crew beavering away and a few nice close up shots of Robson Green. 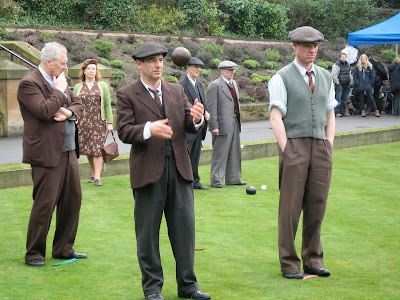 It was more difficult to get close ups of Kevin Whately because he was quite far in the background of this shot. However, I did get a few wider shots of him done.

It was then time to shoot the scene from different angles. Kevin was not required for these shots. So he was taken to the unit base a mile or so away at the grounds of a local amateur football club.

When the camera and other equipment was being moved Robson came over to say hello.

The atmosphere and tension on the set of a production is usually determined by the personality of the actors and director.

It was now obvious why the feeling around this one was so friendly and relaxed.

Robson was about as chilled, welcoming and at ease as it is possible to be whilst still maintaining a professional focus.

We had a quick chat. He expressed a mild degree of delight when I told him that Richard Arnold was on his way up on a busy train.

Patrick the director was equally laid back. He was also pleased to hear that Richard was paying them a visit as they had been at University together.

The guys in the crew, particularly the Pauline the PA, an old colleague of mine from the halcyon days at Tyne Tees were all in agreement that Kevin was also a joy to work with.

The guys all then got back to the job in hand as did Colin and I.

The overcast sky although never clearing was thinning and thickening quite considerably, with a consequent change in light levels.

This was not a major problem to me because I did not need to worry too much about depth of field so I could happily accommodate the fluctuating light by altering exposure, an easy tweak of the iris.

The DOP (Director of Photography) on the other hand was kept busy with his light meter and passed that on to the camera assistant as he had to keep swapping the ND (Neutral Density) filter on the front of the lens.

That takes a little longer and has to be done with a bit more care to ensure no spots or specks appear on the face of the glass. 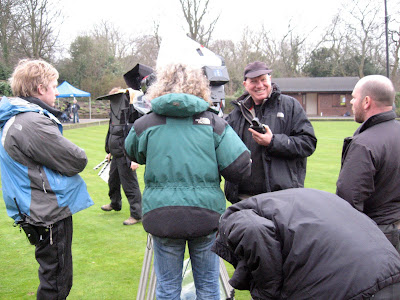 It was almost time for the lunch break. Liz the GMTV producer and Richard had arrived at the Unit base.

Along with the cast and crew we headed over there and joined them for a buffet lunch eaten on a converted double decker bus. 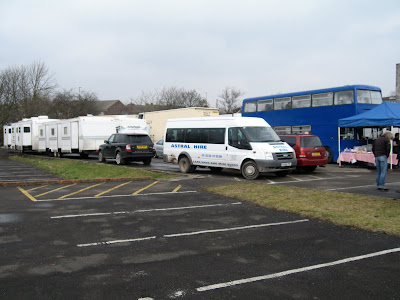 The Blue Dining Room Beside the Various Trailers for Wardrobe and Make Up etc. 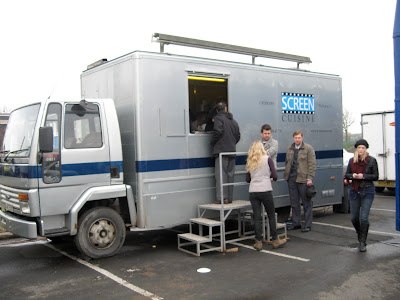 It might not have been the most glamorous place to eat but the food was good.

Every one ate the same food in the same place and had to queue up at the same hatch for the hot stuff.

There was no star treatment for any of the cast regardless of their “celebrity” status.

After lunch a new scene was being shot with just Kevin, Melanie and Finn, one of the kids in the film.

This scene was shot in a very picturesque part of the park just a few yards away from the bowling green. 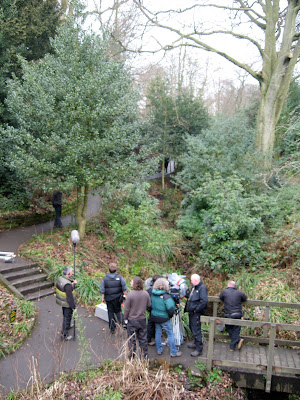 There was to be a lot of dialogue in this scene for Kevin to remember.

We hoped to do the interview with him before he started shooting because with all the retakes and different angles needed it would take most of the afternoon to shoot.

Once they started it would not be possible for Kevin to break off and chat to us on camera because it would break his concentration.

Unfortunately from our point of view as soon as he arrived on set Kevin only had time to say hello before the pressure of the schedule meant he had to go to rehearse and shoot the scene. 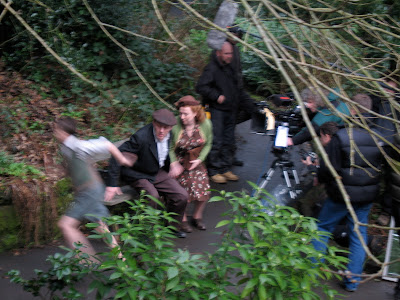 Joe (Kevin Whatley) dashes off to Something Exciting.

We did get a nice interview with Robson done and a few pieces to camera with Richard knocked off. 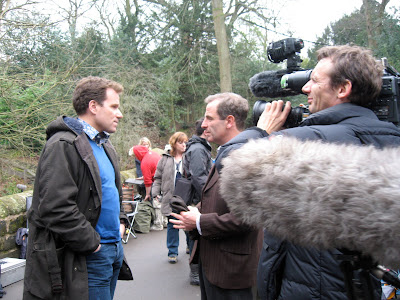 Shooting The Interview with Robson 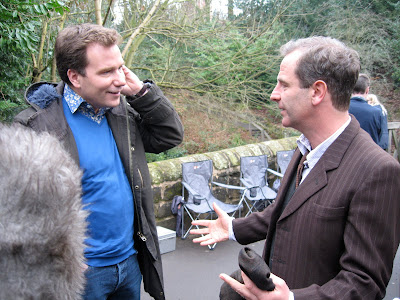 He and Richard Carry On Chatting After The Camera Stops Rolling.

We also had to record a voice over for another report because Richard was going off on holiday the next day.

The best available sound booth was the car. Colin needed to get inside somewhere because the happy sound of spring bird song would not be good over shots that were not outside. 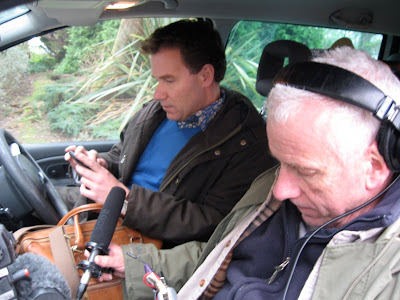 Richard and Colin in the Car to do the Voice Over.

Richard also needed to get some writing done for his magazine column. 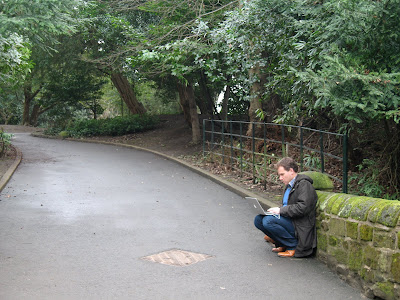 A Lone Columnist Does His Work.

I had done enough shots to cover the report so with still a good forty five minutes to go before we would get a chance to do the chat with Kevin we had time to nip up to Saltwell Park’s very nice little cafe for a cappuccino.

Our return to the set was perfectly timed as the last shot was being done.

With the crew busy derigging the equipment in the background we did our interview with Kevin who was less effusive than Robson but non the less jolly and gave richard exactly what he and Liz wanted out of the chat.

Job done, a wrap for us and only a couple of days shooting on Joe Maddison’s War before they also call it a wrap.

The day had ended a bit later that we would have liked, particularly for Richard and Liz because it would be around 11 pm when their train would get them to London.

Posted by Roving Cameraman at 14:14